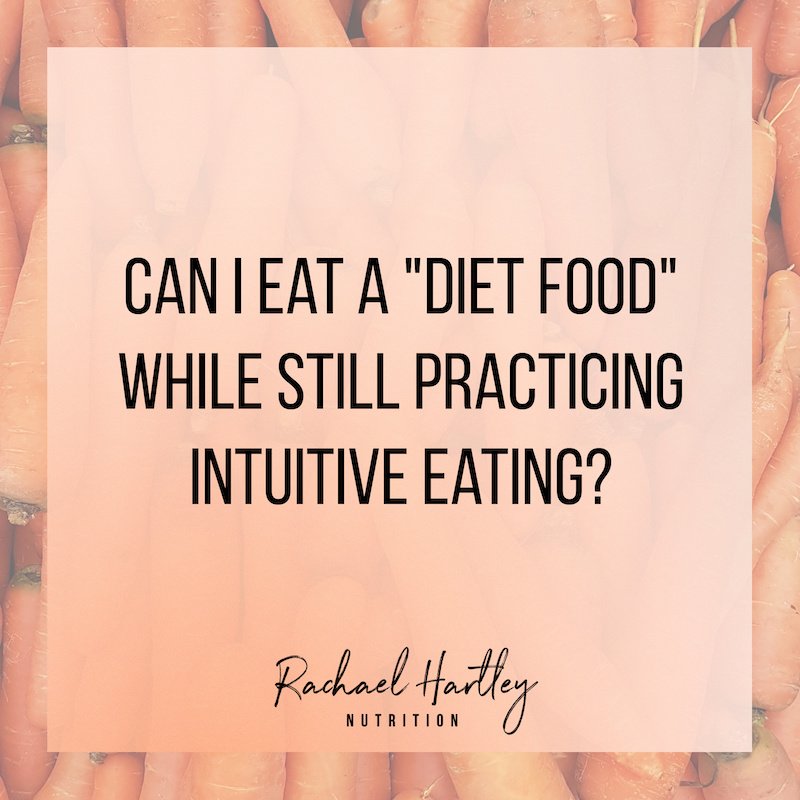 Can I eat a diet food while practicing intuitive eating?

This is a question I’m asked pretty frequently, although usually it’s phrased as some iteration of “but what if I actually want to order a salad? Does that mean I’m dieting?” Often times they feel silly asking the question, but I’ve seen people get really tripped up on these questions! What happens if you think you actually like cauliflower rice or banana “nice” cream or zoodles? Are these “diet” foods still allowed, or would choosing them be considered engaging in a dieting behavior? Am I choosing it because I like it, or because I’m subconsciously dieting? Does this mean I am not eating intuitively?

As you may have guessed, the answer isn’t clear cut. Yes friends, intuitive eating is all about nuance and that applies to this question as well.

When food is viewed completely neutrally, you can see that diet food is almost always just food. Zoodles and cauliflower rice are simply vegetables cut into a different shape. Banana “nice” cream is just another way to eat a banana – basically it’s a spoonable smoothie. And my chicken enchilada suiza is just an enchilada, albeit packaged in a much too small size for a meal. While there may be foods that you could never comprehend eating in a non-diet way, that doesn’t mean it couldn’t serve a different purpose for someone else. For example, I would never choose low fat or non-fat cheese, but for one of my clients who has fat malabsorption, it allows her to tolerate cheesy dishes she has always loved.

Rather than a food being a diet food, it’s how we use it that matters. For example, zoodles and cauliflower rice can be used in balanced meals instead of a substitute for carbs, as a different way to serve vegetables (ex: my summer spaghetti, which combines zoodles with regular spaghetti or the cauliflower fried rice in my book, which combines riced cauliflower with regular rice). Similarly, banana “nice” cream makes a lovely snack and while it is absolutely not the same as ice cream, it’s also really tasty and refreshing.

Lovely Wedding, Nonpareil
We use cookies on our website to give you the most relevant experience by remembering your preferences and repeat visits. By clicking “Accept All”, you consent to the use of ALL the cookies. However, you may visit "Cookie Settings" to provide a controlled consent.
Cookie SettingsAccept All
Manage consent