Sepsis is a potentially life-threatening and life-altering system response to infection, Dr. Guy explains. “It causes an exaggerated immune response that can end up damaging key organs like the heart, lungs and kidneys, and potentially lead to death.”

He compares sepsis to an ember that sparks from a small campfire, suddenly threatening the whole forest. If it isn’t treated early, sepsis can progress into septic shock. Patients may need medications to support their blood pressure and a ventilator to breathe. “Their kidneys are at risk, and they could go into kidney failure and need dialysis,” says Dr. Guy. “These are the folks who are at highest risk of losing their lives.” 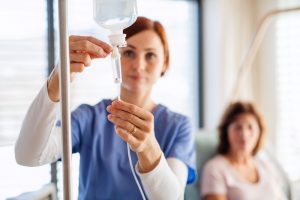 Sepsis can affect anyone, but taking action to reduce the risk of infection can help prevent sepsis before symptoms begin.

Sepsis is more common than one might think. It can happen in response to any kind of infection — a wound, an illness or even poor dental care. According to the Centers for Disease Control and Prevention, more than 1.7 million adults in the U.S. develop sepsis each year, and nearly 270,000 people die as a result. Sepsis is a leading cause of death in hospitals, but most of the infections that lead to sepsis start outside of hospitals.

Infections caused by bacteria are most likely to cause sepsis. This includes infections in the lungs (pneumonia), urinary tract, skin or digestive tract. Viral infections, including the flu and COVID-19, can also lead to sepsis. In fact, the inflammatory cytokine storm that happens in severe COVID-19 is sepsis, Dr. Guy says. He adds that viral sepsis can be especially hard to treat.

The key to successful treatment for sepsis is timely recognition and prompt use of antibiotics and IV fluids. “The chance of death goes up with every hour of delay,” says Dr. Guy.

The initial signs of sepsis, including fever, chills, rapid heartbeat, lower blood pressure and difficulty breathing, can be easy to confuse with other conditions. One of the most common symptoms is mental confusion, which can look like a stroke, a neurological condition or a diabetic event. This can make the condition difficult to recognize and diagnose.

Dr. Guy and his Care Process Design team partnered with HCA Healthcare’s Data Science and Information Technology teams to develop an award-winning way of recognizing sepsis early. It’s known as Sepsis Prediction and Optimization of Therapy (SPOT). SPOT continuously monitors vital signs, lab results, nursing reports and other data to detect often subtle changes in a patient’s condition and alert clinicians to signs of sepsis, as much as six hours earlier than previously, so they can take appropriate action. This system speeds treatment and saves patients’ lives.
While these advancements are making a difference for patients, it’s important to know how to prevent sepsis, as it’s better to keep it from occurring than to treat it after symptoms appear.

Anyone can develop sepsis from any infection. While there’s no way to predict who will develop sepsis and who won’t, the type of infection, its severity and how long it goes untreated can all play a role in the risk of sepsis.

Some medications can lead to a higher sepsis risk, Dr. Guy points out. Taking antibiotics too often or not finishing a course of antibiotics can make you more likely to get an infection that doesn’t respond to antibiotics. It’s also important to note that antibiotics don’t help with viruses and aren’t always needed for sinus infections or ear infections. Taking steroid medications, like prednisone or hydrocortisone, suppresses the immune system and may mask the early signs of infection, delaying treatment.

How to prevent sepsis

Remember: Sepsis can happen to anyone in response to any infection. To protect yourself and your loved ones, take these five critical steps:

1. Stay up to date on vaccinations. This includes COVID-19, the flu, chickenpox, pneumonia and other vaccines recommended for your age and health conditions. Vaccines can prevent or limit the severity of these conditions and reduce their potential to lead to sepsis. “There’s clearly a survival advantage to being vaccinated,” says Dr. Guy.

2. Manage chronic illnesses. Keeping blood pressure, diabetes, kidney disease and other conditions under control helps keep your body strong and able to fight off infections. A healthy diet also feeds your immune system and helps it function properly. Seeing your doctor regularly and seeking care for chronic conditions can reduce your risk of sepsis as well.
3. Practice good hygiene. Wash your hands using soap and water, or use hand sanitizer, especially after using the bathroom or blowing your nose, before eating, and after exposure to large groups or public places. Keep cuts clean and covered until they are healed.

5. Seek care early. Sepsis is a medical emergency. If you experience any of the warning signs, seek care immediately, especially if you have any of the risk factors described above.

Dr. Guy is proud of HCA Healthcare’s SPOT system and its track record of detecting and treating sepsis early and effectively. “Our efforts have resulted in a dramatic improvement in sepsis survival in our hospitals,” he says. “I’m so excited about the lives we’ve saved.”

No matter where life takes us, you are our MISSION. Learn more.

Authentic Car
We use cookies on our website to give you the most relevant experience by remembering your preferences and repeat visits. By clicking “Accept All”, you consent to the use of ALL the cookies. However, you may visit "Cookie Settings" to provide a controlled consent.
Cookie SettingsAccept All
Manage consent